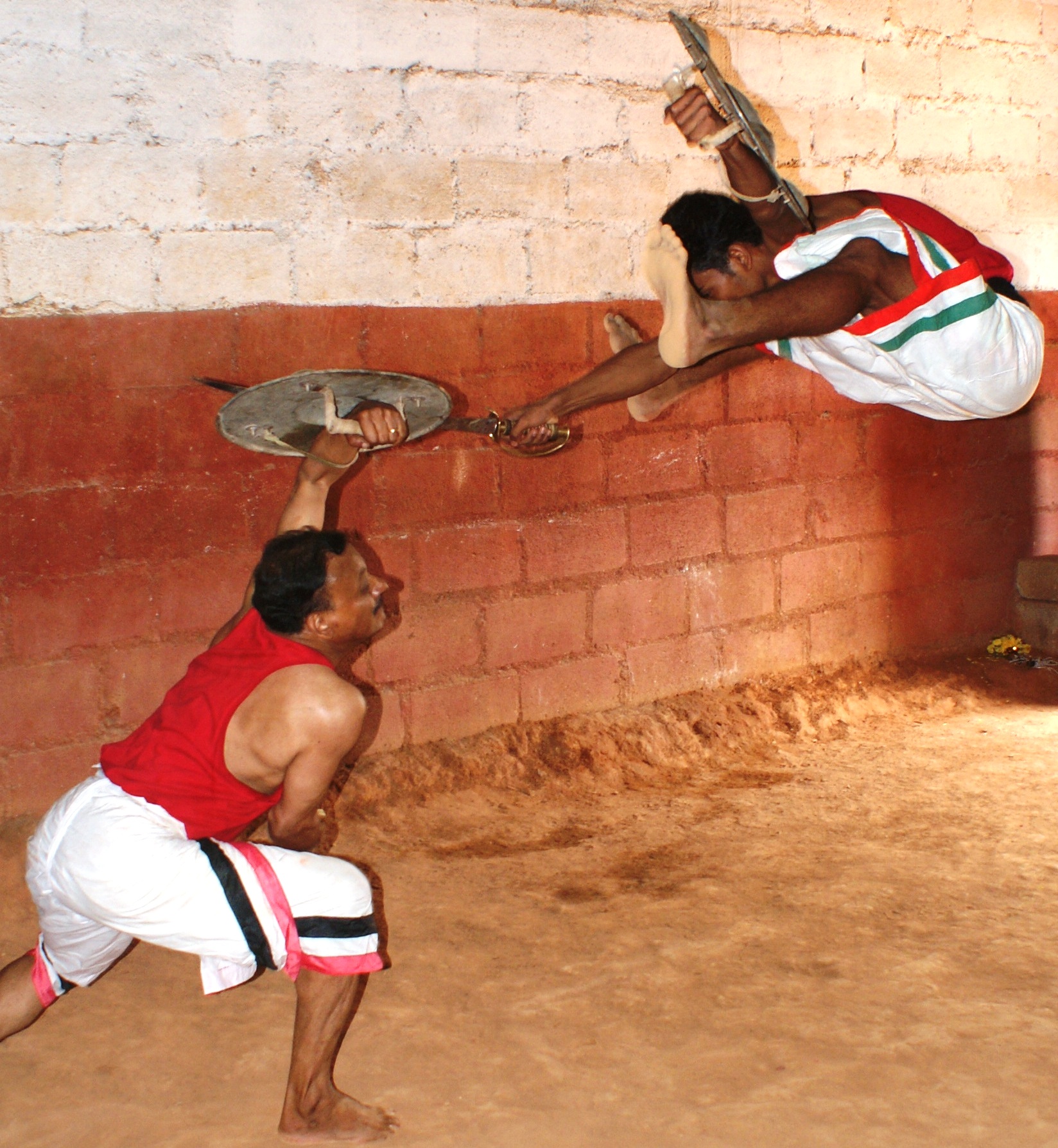 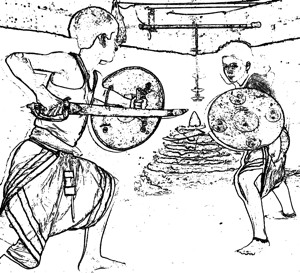 CVN Kalari Bangalore offers Kalaripayattu training five  days a week when Indran Gurukkal presides over the Kalari and gives training with traditional vaithari(Oral commands). On other days, students are encouraged to practice at the Kalari or at home.

We undertake Kalaripayattu demonstration, choreographic works for  cinema and television.

There is no age bar to begin training and admissions are open year-round. 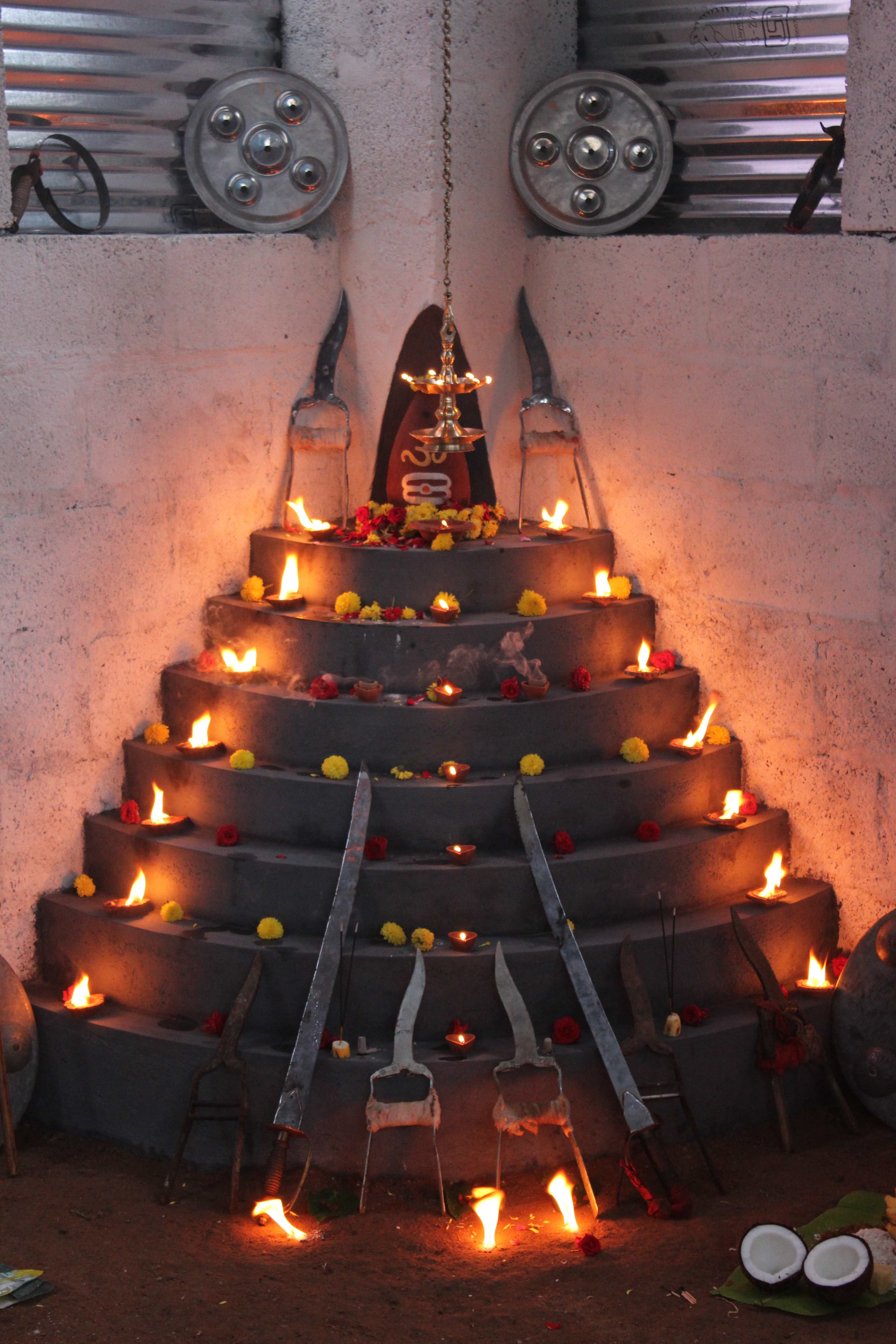 Poothara is a seven-tired platform and located in the south-west corner of every kalari. The seven steps of the Poothara symbolizes Strength, Patience, Commanding power, Posture, Training, Expression and Sound. Students attain the power to control the internal energy, breath, mental power and the power to focus by following the rituals and reciting mantras.

The Gurukkal: The word Gurukkal is the plural of the word ‘Guru’ in malayalam (by adding the suffix -kkal) The Gurukkal of a Kalari is the most respected figure in the Kalari and he is considered as holy as the art itself. He is referred to in plural to signify that he is infact the physical embodiment of all the past Masters in his Kalari lineage traced back to Parasurama himself.

Kalaripayattu training is traditionally carried out in an enclosure which is 21’ width and 42’ length. Such training grounds are constructed according to Vastu shastra and are considered sacred. The entrance faces the East and the place of deity is to the South West.  Students are instructed not to sleep during the day time and are advised to sleep well at night. It is important that the students understand that Kalari is not only a means of self-defense but also a means to becoming determined and self disciplined.

Kalari training can be started as early as seven years of age. Beginners start with training in balance and body flexibility and then move on to advanced lessons. Kalari requires speed, agility, and co-ordination of body parts. The training to become a Master includes training in Ayurveda and knowledge of human anatomy which helps in understanding vital nervous points.

Note:- POOTHARA PRANAMAM (SALUTATION OF KALARI PAYATTU) The seven Sacred Steps in the South West Corner (Kannimoola) of the Kalari are called “Poothara”. Poorthara Pranamam is an important and foremost feature in Kalari.

I. MAITHARI – PHYSICAL EXERCISE ANGASADAGATHVAM (Leg Exercises). Training is Kalari commences with leg exercises. With 16 different exercises in this category, the student learns to grip the floor with his toes, to keep his balance and to focus while performing the exercises. Practicing the leg exercises everyday stretches the muscles well and improves the performance of the student. The movement during these exercises is from east to west and back while the Gurukkal (Instructor/Master) gives commands. The side commands of the Gurukkal, known as Vaithari are rhythmic and aid in timing of various movements. This basic training is necessary before advancing into the techniques of Kalari Payattu.

Maipayattu is a pattern of exercises that integrates all categories of body exercises. Regular practice of Maipayattu results in controlled, flexible and graceful movements of the body and helps develop breath control (Pranayama), strength, flexibility and stamina. The movements have to be performed with a continuous flow of energy. In Maipayattu one seeks to achieve the softness of a cat and the swiftness of an antelope and can act even on a very restricted surface. Through these exercises, the student’s body becomes like a weapon and he is now capable of excelling in the use of the Kalaripayattu weapons also.

II. KETTUKARI (KOLTHARI) Kolthari refers to the use of wooden weapons especially a stick about 5to 6 feet long. This is the first weapon to be taken for practice in Kalaripayattu. The stick training allows one to use it as powerful weapon of offence and defense. Stick fight is the preliminary phase to learn the art of fighting with a spear.

CHERUVADI Cheruvadi is a 3 span step much shorter exercise regime but requires more care and precision. The movements are very rapid and blows are delivered and parurd in quicker successions. The practice of Cheruvadi calls for great ability of movement and about a 100 blows can be dealt with it in a minute.

OTTA (Curved Stick) One of the most important weapons in Kalari is a wooden curved stick with the shape of an elephant tusk. It is important because it is linked to the knowledge of the vulenerable points (Marmas) of the body. Otta Kol is 18 to 20 inches long with a knob at the point end. The knob is used to thrust the Marmas during combats at close quarters. This weapon is taught only to students in advanced courses who are disciplined, skilled, devoted and trustworthy. Training of the metal weapon precedes this weapon. It is said “Otta payattuyal Urakkathum payattam” – which means a student who is well trained in Otta fight can fight even when asleep.

GADHA (MACE) This heavy wooden weapon (4 to 9 kg) must be wielded by well built person. It is strictly followed that this weapon should not be aimed below the waist of the opponent. Obvious reasons for which can be found even in puranic stories. Balarama, Bheema and Dhuriyodhana were the greatest exponents of this weapon – using Gada as their chief weapon. Blows on vulnerable points of the body like temple and chest can be fatal.

III. ANKATHARI (Metal weapons) The dagger has a length of about one foot and is sharp on both sides. It is pointed at the end. It is used for slashing, cutting and prevention of attacks. No shield is used, blows being parried with the dagger itself. Cuts and thrusts can be made on any side and the slightest lack of attention on the part of the combatant could find his opponents dagger deep into his body.

UDAVAL (Personal Sword) Udaval involves training in fight with sword. Attack and defense are done by sword only.

PULIANKAM (Sword and Shield) The word Puliankam is derived from two words Puli meaning ‘lion’ and ankam meaning ‘fight’. Most of the techniques employed in Puliankam are derived from animal fights, particularly the cat–like wild animals. Like in all other types of combat, puliankam involves all important techniques of Maipayattu, especially the jumps.and flow of the body. The fighters identify themselves with animals by using animal-expressions. In this fight blocking and attacking often happens simultaneously. The sword and the shield symbolize lord Shiva and goddess Sakthi respectively.

KUNTHAM (Spear to Spear fight) In Kuntham, the fighters use only the spear. The sharp point of the spear is to attack various vulnerable points of the body. The defendant uses the spear to defend himself so the spear is used from both the sides. The spear can be also be used to cut away.

MARAPIDICHA KUNTHAM: (Sword and Shield against spear). In Marapidicha,kuntham one is armed with a sword and a shield, while the other with a spear. Unlike in other combats where the opponents face each other with identical weapons, here different weapons are used. During wars combat would often be between two men armed different weapons This type of fight is a good example of how to deal with this situation. Usually the shorter man is at a disadvantage due to the length of spear. Therefore, the shorter has to exploit all the weaknesses of the opponent. One has to very careful while blocking the spear as it points at him from a longer distance.

KATHIYUM THALAYUM: (Knife and cloth) Kathiyum Thalayum involves the most crucial techniques in the art of self-defense. One person attacks with a knife and other defends himself with the aide piece of cloth held with both hands in a peculiar way. This technique is very interesting to watch.

URUMI (Flexible Sword) The flexible sword is double edged sharp weapon. It is a long flexible sword measuring 3 to 4 feet in length and sharp on both sides. One cannot handle such a sword unless he has mastery over body control exercises. This weapon was used by a warriors during mass encounter. One person skilled in the use of this weapon can attack several opponents at a given time. The use of this weapon is also highly dangerous for user himself because of its strangling nature.

IV. KAITHALLU or VERUMKAI “Kai” means hand, “thallu” means hitting. Students face each other in pairs and exercise arm muscles by hitting and blocking. Leg kicks and elbow thrust however are also included in this. Practitioners have to take care of the distance between the students.

Ashta Vadivu (Animal postures) ‘Ashta’ means 8 ‘Vadivu’ means posture. There are basically eight animal postures used in Kalaripayattu. This is a very important feature in Kalari because it involves a lot of body movement that requires a good control of the body, focusing, concentration and balancing. Through these postures one also learns to control the breath. Following are the Ashta Vadivu:

Chuvadu (Steps) While performing most fights the student’s feet will be in one of the four defined positions.

Aka chuvadu :A frisk step of small distance, ready for action – defense or offence.
Neeka chuvadu :A moving step to avoid or to respond an opponent. Move
or act as in an attacking action.
Vatta chuvadu : A parallel step like in elephant stance
Chatta chuvadu : A jumping step
Ottakal chuvadu : Balancing on one step
Kon chuvadu : A diagonal step
Vettu chuvadu ‘Vettu’ means to cut

Speed, concentration and powerful strokes with the hands are enhanced in this cycle of exercises.

Verunkai (Barehanded fight) Verunkai involves predominantly the use of bare hands for a fight. An attack during unarmed moments can be handled by using one’s hands that may be aided by a piece of cloth or a rope. Locks and blows are the main feature of such combat. Attacks directed to various parts of the body especially the nervous system using blows and kicks are therefore practiced to perfection in Verunkai.

The word Marma stems from the Sanskrit word “Mrung” or “Marane”. “Marane” means death “Mrung” means close death. About 107 vital spots in the human body can be injured in a way that may lead to death. Marmas are a central part of life and in total about six types of Marmas have been defined –

4. Sira Marmam – refers to arteries. Totally 37 Sira Marmam’s are there.

Application of pressure or insertion of needles (Bhedan karma) at these points will effect the flow of vital energy orPrana along a complex system of subtle channels calls Naadis. This forms the basis of Marma Chikitsa (Treatment based on Marmas)

Marma has three divisions according to their toughness to master and effects.

The second and third are more esoteric in nature and their mastery needs many years of committed learning and practice. It was also said that the master only taught the science of marma to the most mature and worthy.

Katcha
Katcha Katcha is a 18 Muzham long cotton cloth worn around the abdomen to increase stamina and agility of the trainee. It is also an abdomen guard. Students now a days wear only a small cloth for their lions which is called the longoti.